Bernd Riebe Posted on Februar 18, 2019 Veröffentlicht in Literatur No Comments

The first Elizabethan theatre was built in 1576 by James Burbage. Before that the players had no permanent home. They were accustomed to act on a variety of stages. they gave private performances in the great halls of noblemen’s houses or in one of the Queen’s palaces or the Inns of Court and they acted in public in Town Halls and inn yards or in any place were they could erect a stage and collect a crowd.
There are almost no contemporary paintings which might have illustrated life of the Elizabethan age in England as there were in the Netherlands by Peter Breughel and others. Most of the woodcuts and engravings in books are crude and amateur. No English artist left a picture of the inside of an Elizabethan theatre.

Modern reconstructions of the Elizabethan stage are thus largely guesswork, based upon such evidence as survives:
1. the Swan drawing by the Dutchman Johannes de Witt who visited London in 1596 and made a sketch of the Swan Theatre.
2. stage directions in early texts and casual references in books and letters
3.  the contracts for building the Fortune Theatre in 1600 and the Hope in 1612
Reconstructions of Elizabethan Stages
The stage used by these players was simple – a platform of boards resting on trestles or barrels, with a curtained booth at the back where the actors could change their costumes or wait for the cue for entrance. The evolution from this kind of stage to the elaboration of the Fortune has been well traced in a series of reconstructions by C. Walter Hodges in The Globe Restored, 1953, some of whose drawings are here reproduced. The desccriptions are based on notes by Mr Hodges.
As the contract shows, the Elizabethan playhouse was small. The external dimensions were only 80 by 80 feet (24m x 24m) and of the interior area of 55 by 55 feet (17m x 17m), left between the galleries, the stage occupied almost half. Even by modern standards the size of the stage is considerable. Unfortunately the contract is vague about the stage itself, all details are „prefigured in a plot (or plan) thereof drawn“ – and the plot has perished.

The stage shown here is based upon two pictures, one from the sixteenth century by Peter Balten, and the other from the seventeenth century by Callot. The stages they show are almost identical.
The sketch above is intended to represent a provincial fit-up. In the more firmly established conditions obtaining for a while at the great London inns this arrangement may have been modified somewhat, the stage perhaps being married up with the surrounding buildings, but the general effect was probably much the same.

The little srage and booth has now been moved into the arena, but it can be dismounted and removed if the yard is wanted for the „games of bulls and bears“. When the stage is in position the galleries adjoining it are taken over as back-stage area. The top of the booth has here been boarded over and railed in, so that it can be used as an acting place, and it is rather more eleborately decorated than formerly.

This sketch is based upon the Swan drawing. The top storey opening within the Heavens is conjectural. The position of the Heavens hut set fairly low within the encircling roof, is in accordance with several authentic views. The main weight of the hut is here carried upon the line of the tiring house facade.

The overall dimensions and layout are according to the contract but details are necessarily conjectural. The building was probably set with the tiring house backing on to the street, and the audience entered the yard along the gangways on either side of the stage. „Iron pikes“ as in the contract, are placed along the parapet of the bottom gallery to prevent persons climbing over from the yard. Upper galleries are reached by stairs in the angles of the building near the street.

Only one contemporary sketch of the Elizabethan stage survives. A Dutchman named Johannes de Witt visited London in 1596 and made a sketch of the stage of the Swan theatre

The Globe Playhouse 1599-1613
A conjectural reconstruction by C. Walter Hodges 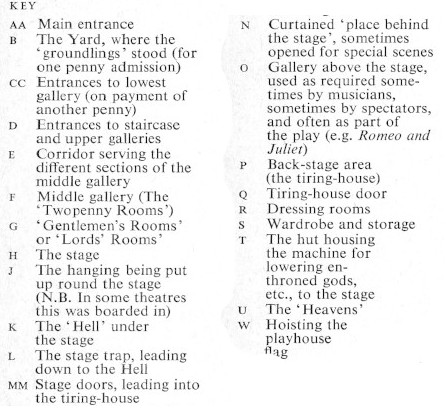 Only one contemporary picture remains of a performance of a Shakespearean play – a sketch made by Henty Peacham in 1595 of an incident in the opening scene of Titus Andronicus where Tamora Queen of Goths pleads with Titus for her two sons. In the picture, Titus, Aaron the Moor, and the two sons wear renaissance classical military garb, Tamora wears flowing draperies, while the two soldiers supporting Titus are in more or less contemporary Elizabethan costume.

The structure of the stage affected the form of the play
The structure of the stage considerably affected the form of Elizabethan plays. In the modern theatre the actor is separated from his audience by a curtain which conceals or reveals the whole stage. Moreover, he acts in bright light before spectators hidden in a darkened auditorium. On the Elizabethan stage the actor came forward in daylight into the midst of his audience. He and they were thus fused into a common experience. The device of soliloquy was not, as on the modern stage, embarrassingly artificial, but a quite natural communication as a character explains his thoughts and intentions to those immediately before him. As there was no need for him to shout, the greatest subtlety of voice, gesture and expression was possible. Nor needed he to speak slowly; in that small auditorium every word could easily be heard, and the spectators were eager and trained listeners.
Apparently there was no scenery, apart from an occasional property gate, tree, or the like, and plays were acted in daylight. The Elizabethan actor was thus without the lighting, scenery, sound effects and other realistic or symbolic adjuncts of the modern stage. He just gained his effects by a direct assault on the emotion and the imagination of the spectators. A good actor could carry his audience with him by the emotional force of rhetoric.
The action was continuous. A scene ended when all the actors had gone off the stage and a new set of characters came on. There was thus a quick continuity of performance with no break in the illusion. As there was no scenry, so there was no limit to the number of scenes. Usually the exact locality of the scene was unimportant. When it was necessary Shakespeare showed it in the dialogue.
The Elizabethan acting company
The Elizabethan acting company was a permanent fellowship of players and they worked on the share system. Since the actors were partners in the concern, the Company remained constant. They were ten to fifteen regular sharers.
The importance of the Company system is considerable. Nowadays a director assembles actors suitable for a particular play, and he can draw from a vast reservoir of all kinds and types. If he needs an actor who specializes in taking the part of a certain character he will find several available. Shakespeare had to write for his Company as it existed. He could not therefore produce characters for which the Company had no physical representative.