Bernd Riebe Posted on Februar 25, 2018 Veröffentlicht in Literatur No Comments 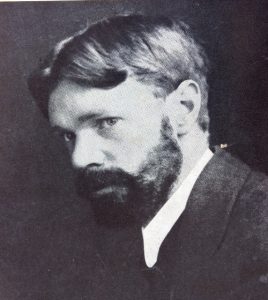 David Herbert Lawrence was born, the fourth child of a miner, on 11 September 1885, at Eastwood, some eight miles north-west of Nottingham. Coal had been mined in the district for centuries, but until about forty years before Lawrence’s birth the process was still practically medieval.. The miners lived in thatched cottages and worked their small mines in the hillsides, the coal being drawn to the surface by donkeys that plodded wearily in a circle round a gin .

About 1850 the scene was transformed by the arrival of the capitalists and the railways. Large collieries were built among the fields, the old cottages gave way to decent but dull rows of brick dwellings built by the colliery companies. Although the population of Eastwood could be classified as almost entirely „industrial working class“ it was a world far removed from the densely populated areas of London, Sheffield or Liverpool.

According to Lawrence, the miners themselves did not care very much about their wages. They lived an almost purely instinctive life, developing an a great sense of intimacy and comradeship with one another as they worked half naked down the pit and continued this intimacy as they drank together in the pub after work. They were not at home in the daylight world of hard facts, of money and home responsibilities. But the colliers‘ wives had to live in this daylight world; they had to worry about the material things and do their best to make decent homes for themselves and their children. And the closer the wives got their desired middle-class standard of living, the more their collier husbands appeared to them as blundering intruders from an alien, more primitive world.

It was this conflict between Lawrence’s own parents that had an decisive effect on his life.

Lawrence’s novels are not only his spiritual autobiography. They also record in detail the actual physical surroundings and events of his life and almost all of his friends somehow appear in his fiction. According to them – this should be stressed here – Lawrence was not just a wonderful man, or a difficult an, or at times perhaps almost a mad man, not just a preacher, or a prophet, or an advocate of social and sexual reform – but, above all, a great writer.

Sons and Lovers was his third book after his first The White Peacock where Lawrence had shown his powers of observation and description of nature and the second The Trespasser where the theme is failure of contact, lack of warmth between people.

In Sons and Lovers Lawrence begins to extend the boundaries of the novel and – for the first time in English fiction – writes about the working class family life untouched by sentimentality or condescension. For the first time an English writer gives an account of the complete life – mental, spiritual, sexual – of a married couple, or of young men and women growing up.

It is the story of his own early life. It represents a very great step forward from The Trespasser and The White Peacock. Sons and Lovers at once put Lawrence amongst the leading novelists of his day.

The first part of the book is a brilliant realistic picture of working class life, childhood games and illnesses and festivities, of making a living on very little money. And although the family is overshadowed by the split between father and mother, there are still times of great happiness.

Home was home and they loved it with a passion of love, whatever the suffering had been.

The theme of the second part of the book is the struggle for Paul’s soul between his mother and the girl Miriam, who lives with her family on a small farm a few miles from the Morel home.

Miriam urged the artist to life in Paul, but the man she ignored, just as Paul ignored the women in her. The both regarded their relationship as platonic.It was not a case of Paul fighting down sexual desire; he just did not want Miriam like that. He wished he did. He would have given his head to have felt a joyous desire to marry her and to have her.. But it seemed as if virginity were a positive force which fought and won in both of them. This is the puritan tradition with a vengeance – a fierceness in purity reminiscent of the young Milton. And the reason lies. In this case, with the lovers‘ mothers. Miriam’s mother had said to her, There is something in marriage that is always dreadful, but you have to bear it. Today this may read like a caricature of Victorian marriage, but at the end of the 19th century it obviously represented what was often the painful truth:

At last Paul forces the issue and makes love to Miriam, who sacrifices herself because she loves him. He can only act from brute strength, without thought of her and this initiation into manhood leaves him with a sense of failure and death. Instead of drawing them together, it puts them apart.

But Paul did not have to contend only with the conflict in his love for Miriam; more acute was the fight between Miriam and his mother for his soul. His deepest love was for his mother and he realized that he was life to her. As long as she lived he could not give himself completely to another woman. However, after his break with Miriam, he turns to Clara Dawses. Clara is the type of new woman of the period: married, but separated from her husband, she earns her own living and is interested in the Suffragette movement. After Miriam’s deep spirituality, Clara seems trivial and flippant, but she has the warmth and mature womanliness that Miriam lacked. For a time Paul and Clara are passionately in love but the consummation of their love brings only momentary satisfaction. For Paul there is the same sort of impersonality about it as there was with Miriam: It was not Clara. It was something that happened because of her, but it was not her.

Clara, like Miriam, realizes that she has no hold over the real and vital Paul.. She has served her purpose in the story, and can can be shuffled off the scene by being reconciled to her weak and worthless husband, after a melodramatic fight between him and Paul.

Meanwhile Paul’s mother has died, slowly and painfully, and he is left derelict, in despair. There is no one now to love him, no mother, no Miriam, no Clara; but the book ends with a rejection of despair and a determination to face the future.

Sons and Lovers has been, and is likely to remain, Lawrence’s most popular novel. Up to Paul’s affair with Clara, the story is almost completely autobiographical.

There is no evidence that anything like Paul’s affair with Clara actually happened in Lawrence’s life, though several women he knew may have supplied ideas for Clara’s character.

The novel also deviates from reality in denying Paul the education that the author had. Lawrence himself spent only three months as a clerk with a manufacturer of surgical appliances before training to become a teacher, whereas Paul is permanently employed there after leaving school.

The book is at its best when it is nearest the truth- in the brilliant early pages on the Morel’s family life. In the second part of the book, dominated by the Paul and Miriam relationship, there is more of a sense of strain, because Lawrence is obviously still puzzling out exactly what has gone wrong between them – but the adolescent world is wonderfully evoked. The final Clara episode is the least satisfactory, however the end of the story is redeemed by the moving account of Mrs Morel’s death.

Lawrence was just twenty-seven when he completed Sons and Lovers. Already he had achieved what no other English novelist before him had attempted – a complete and comprehensive picture of childhood, adolescence, and young manhood, which had both spiritual depth and vivid circumstantial detail.

Sons and Lovers has certainly not lacked strictly literary-critical attention, but much of this has tended to see the book chiefly as a precursor of the later Lawrence. There is no doubt that both The Rainbow and Women in Love are greater novels and that the earlier novel often illuminates the later ones. However, Sons and Lovers is definitely an enjoyable and important novel in its own right.