Bernd Riebe Posted on Februar 26, 2018 Veröffentlicht in Reisen No Comments 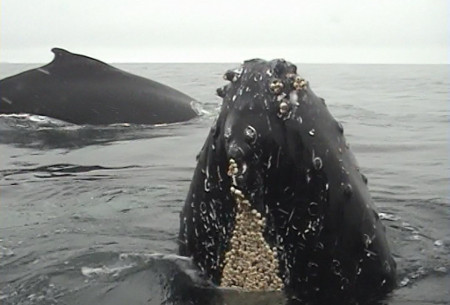 Humpback whales are lonesome wanderers of the world’s oceans who travel thousands of kilometres in the course of a year, crossing the equator several times and then spend the summer months in the southern or northern hemisphere in polar waters. There they will find an abundant supply of their favourite food, krill,  of which they consume tons and tons  every day. The humpback whale makes a hunchback when diving, hence the name, and its enormous tail fin dips completely out of the water, to the delight of all „Whale Watchers“ He grows up to 18m long with a weight of over 20t.
I was on the way in February, in the Antarctic summer, with a Russian ship that brought English scientists and a few tourists to some research stations along the Antarctic Peninsula. I was hoping for some useful footage from this trip, whales weren’t actually on the program. 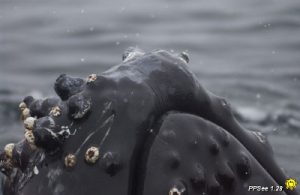 On a very quiet, grey day with light snowfall in the Gerlache Strait north of the Antarctic Peninsula, we were with some English biologists in two zodiacs to take samples of krill, among other things. Maybe, they said, a whale will show up. Although I didn’t give much importance to this vague assumption, I took my camera with – you never know – a slight smile from the other passengers. Standing in a swaying dinghy and poor visibility are not the best conditions for good shots. Soon we drifted noiselessly in barely perceptible motion between bizarre icebergs, which penetrated the uniform grey of the environment with its deep blue tones. There was absolute silence.
Then suddenly a noise! My first thought was a horse snorting! The absurdity of this sensation became evident at the sight of a huge body resembling a hippopotamus, floating in slow turning movements about 100m in front of our boat. „Wow! This must be a huge humpback!“ I heard Christian, a British biologist, calling. A full-grown humpback whale thus seemed to be in direct proximity. The almost mirror-smooth sea surface now showed wave movements in several places. Then in almost synchronous movements three huge humpback whales ploughed through the water around us. The whales orbited us only a few times and then suddenly dived down , lifting their huge tail fins spectacularly out of the water. We congratulated ourselves on this unexpected performance and were just about to start the engine and hold out for the waiting mothership as our three journeymen, one after the other, reappeared. 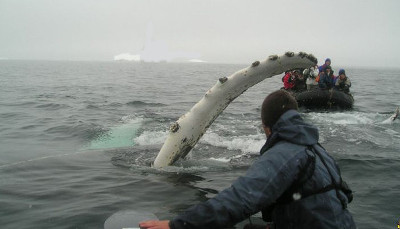 This time they offered us a truly unique spectacle that I will never forget. The whales swam one by one towards our boat, pushed their water fountains in the immediate vicinity into the air, dipped then only centimeters before our boat, crossed underneath us without any contact and emerged on the other side again! This was repeated several times. I was standing on the swaying boat floor with my camera, trying hard not to go overboard. Only later I realized that these animals could have capsized our boat with only a small movement of their tail fins, which would have meant certain death for us, at water temperatures around freezing point. But it seemed that’s what our whales were trying to avoid. They moved around and past the boat so elegantly that there was no contact. We soon realized that the animals were just curious about these strange companions who had gotten lost in their waters. This became particularly clear when one of the three journeymen dived about 20m in front of our boat and then at a distance of about 1m the huge head stretched out of the water, as if he wanted to see us strange creatures from close up. This was an indescribable experience and can only be shown insufficiently in the video. I felt the strong smelling breath, heard the high-frequency sounds and experienced this closeness to this highly sensitive being so immediately that I forgot everything around me, even the camera I put down for a moment, I was so overwhelmed. After about 20 minutes of acting, the three of them made a few more circles around our boats and seemed to say goodbye to us with their fins. Then they went under water one last time and stayed away. We stood for a while, looking at the now completely calm water again, each of us obviously busy with processing these deep impressions.