Bernd Riebe Posted on Februar 26, 2018 Veröffentlicht in Reisen No Comments

Some time ago in the southern summer I had the opportunity to visit some Antarctic research stations on board a Russian supply ship. Not far from the Argentinian station „Esperanza“ off the Antarctic peninsula is Paulet Island, about 2 x 3km in size, the rocky ground is free of snow from January to March. Biologists told me that there should be a huge colony of Adelie penguins who use this ice-free area every year to raise their young. When some English biologists made the tempting offer to visit the island by zodiac, I couldn’t resist joining this group. It should be an unforgettable experience

We were still about 2 miles away from the island and could easily recognize the 300m high central elevation in clear weather, but we did not see any living creatures. But suddenkly there was this smell! Not necessarily smelly, but very strong, reminiscent of freshly fertilised fields, this smell almost took our breath away. We turned around and tried to head for the island from the windward side, gradually getting the air cleaner and breathing easier.

The landing was not so easy, because of the many ice floes and the cliffs in front of it. The best landing place we could find was a small, almost ice-free bay with a steeply sloping shore. After a few daring jumps, everyone finally – more or less wet – reached the shore. The zodiac was tied up, a time for the departure was agreed upon, the biologists set to work – essentially stocktaking – and I went into the interior of the island on my own. Still no sign of the penguins, but to hear all the more! A many-voiced jabbering and fiddling seemed to come from above our landing place. I climbed up a steep, slippery slope with difficulty and finally reached a higher situated rock plateau, circumvented some huge boulders and then had a clear view over the island. What I saw, heard and smelled was indescribable. Thousands of Adelie Penguin chicks were standing close together either nervously beeping or patiently waiting. In between were the penguin parents, some of them the goitre full of krill in search of their offspring, others feeding under wild bickering of the chicks and finally others on their way back to the sea to look for food for the next meal.

Carefully I moved towards the crowd, hoping not to panic. To my surprise, my presence was completely ignored, the young birds must have regarded me as a foreign penguin, who posed no danger and from whom above all no food was to be expected. So I was able to make some interesting observations sitting in the middle of the crowd and to record the events on video.

Above all, I was interested in how the parents, returning from the sea, loaded with krill, find their children (mostly two chicks) in the middle of the huge colony. As the biologists explained to me, this is essentially done by means of acoustic signals. So I followed a returnee with the camera, who apparently waddled through the crowd in a target oriented manner. On the way he was repeatedly harassed by chicks, who obviously pretended to be his, but were energetically rejected every time. After about 5 minutes the penguin-papa had indeed found his two hungry chicks and a wild feeding procedure began. The parent animal gradually choked out the food directly into the wide open beaks of the kittens. These were fighting constantly and with all means for a place at the beak of the feeding. Even after the last crumb of food has been choked out, the little ones did not rest and pressed Papa Penguin by means of strong beak dots. The poor man could only escape from it by fleeing and was followed for a while by the clumsy youngsters, who kept falling on their s 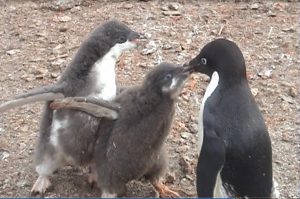 tomach. Finally back in the water, the exhausted man visited an ice floe to recover together with other fellow sufferers.

For the remaining chicks, a waiting period of several hours began again, which they  bore stoically close to each other. Their biggest enemy is now the Skua, a predatory gull, who can choose its victim freely. The only „protection“ is the large number of potential victims.

This fascinating spectacle of nature preoccupied me so much that I could hardly feel the cold, which quickly intensified with the rising wind. But then I went down to the sea and found our mooring place besieged by a dozen fur seals, which lay idle on the gravel and just as the Adelie penguins did not take any notice of me, not even when I had to walk very close between them in order to get to the zodiac.