Bernd Riebe Posted on Juli 9, 2020 Veröffentlicht in Umwelt No Comments

The last 12000 years – Deviation of Temperature 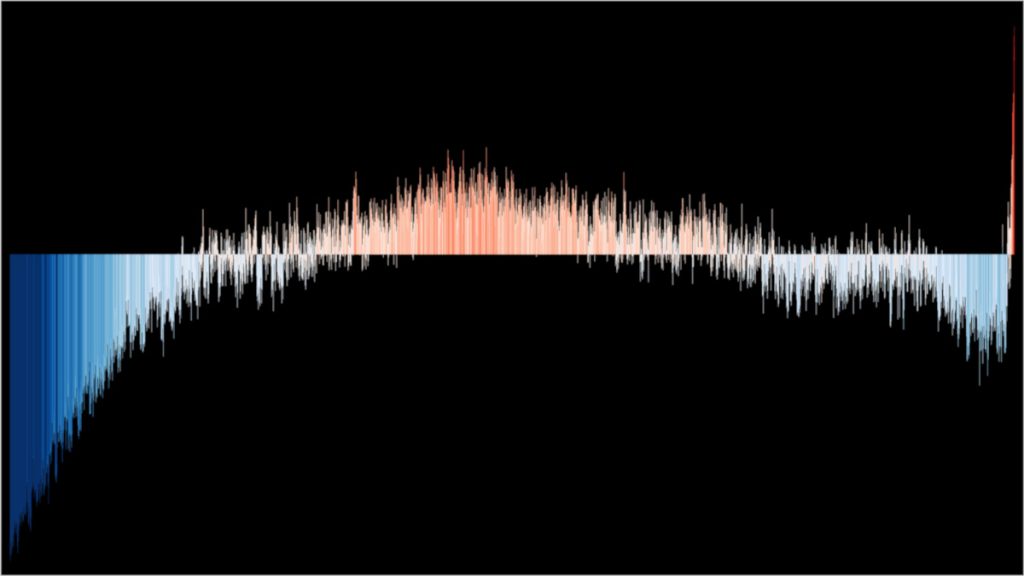 This graph by Alexander Radtke shows the global annual mean temperature deviation for the last 12 000 years. The baseline is the 20th century mean, min on the far left -1.37 C (9980 BC( and max on the right+0.99C (2020). The strong negative anomalies on the left indicate the end of the last glacial period (12,000 – 9,000 BC) followed by the Holocene climate optimum (9,000 – 5,000 BC).  This warm period was followed by a gradual decline until about two millennia ago. The medieval warm period (900 – 1100) shows frequent years warmer than average though also negative anomalies. The little ice age on the far right (1500 -18 00) is followed by the well known unprecedented rise in temperatures in the present.

IPCC Special Report on the Ocean and Cryosphere – Key findings

The Special Report on the Ocean and Cryosphere in a Changing Climate (SROCC) 2019 follows the other two Special Reports on Global Warming of 1.5ºC (SR1.5) and on Climate Change and Land (SRCCL)5 and the Intergovernmental Science Policy Platform on Biodiversity and Ecosystem Services (IPBES) Global Assessment Report on Biodiversity and Ecosystem Services.

In summarizing the key findings of the SROCC  I wish to point out once again that climate change has a particularly strong impact on the polar regions. The loss of Greenland’s ice, the melting of glaciers, the loss of ice in the West Antarctic, the thawing of permafrost soils are already having serious effects on the environment. The rise in sea level, the warming of the surface water, the lowering of the pH-value are only some of the serious consequences of the general global temperature increase. If effective measures to reduce climate-damaging emissions are not taken soon, especially by the industrialised countries, an ecological catastrophe will be unstoppable.

RCP2.6 represents a low greenhouse gas emissions, high mitigation future, that in CMIP5 simulations gives a two in three chance of limiting global warming to below 2ºC by 2100
RCP8.5 is a high greenhouse gas emissions scenario in the absence of policies to combat climate change, leading to continued and sustained growth in atmospheric greenhouse gas concentrations.
Even a first look at Figure 1 shows that the future looks bleak in the worst case scenario RCP8.5: The global surface temperature will rise more than 4°C, ocean surface temperature around 3°C, the acidity will be higher (pH level drops) with a reduction of the ocean oxygen  of more than 4 per cent.

Marine heatwave days will change by afactor of 10, the ocean heat content of the upper 200m layer will be five times higher than today resulting in a a 30cm rise of sea level due to the expansion of sea water.

The arctic sea ice has its lowest extent in Septemper. The figure shows that even under the low emission scenario the reduction will reach 50 per cent and about 100 percent under the very likely RCP8.5 scenario, which means, there will be no ice at all! The arctic snow cover might be reduced by 50 per cent. These dramatic changes will heat the atmosphere even more due to the albedo effect. 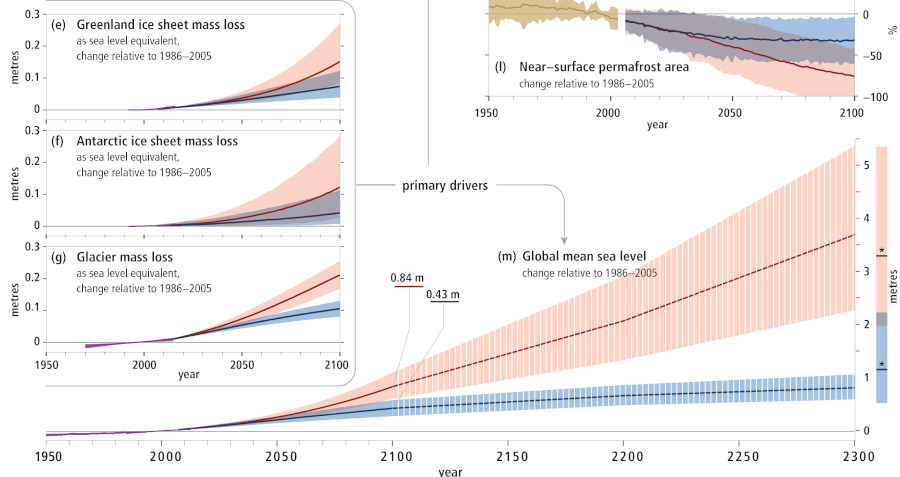 On the left in the figure above the ice mass loss of glaciers and the Greenland and Antartic ice sheets is shown in sea level rise equivalent. The glaciers contribution to the projected sea level rise is largest with a steep rise in the worst scenario and strong also in the low emission scenario. Whereas the Greenland and Antarctic ice sheets loss result in a slow but steady rise of the sea level, however these graphs seem to rise exponentially and the melting ice sheets will  become the primary drivers in the long run. The figure also shows a dramatic sea level rise of nearly 4m in the high emission scenario in the distant future. Also shown is the reduction of the permafrost area of about 75 per cent in 2100 which could result in the release of huge amounts of methane, another very potential driver of global warming.

Here are the key findings of the latest report (SROCC)

It is virtually certain that the global ocean has warmed unabated since 1970 and has taken up more than 90% of the excess heat in the climate system (high confidence). Since 1993, the rate of ocean warming has more than doubled (likely). Marine heatwaves have very likely doubled in frequency since 1982 and are increasing in intensity (very high confidence). By absorbing more CO2, the ocean has undergone increasing surface acidification (virtually certain). A loss of oxygen has occurred from the surface to 1000 m (medium confidence)

Cryospheric and associated hydrological changes have impacted terrestrial and freshwater species and ecosystems in high mountain and polar regions through the appearance of land previously covered by ice, changes in snow cover, and thawing permafrost. These changes have contributed to changing the seasonal activities, abundance and distribution of ecologically, culturally, and economically important plant and animal species, ecological disturbances, and ecosystem functioning. (high confidence)

Since about 1950 many marine species across various groups have undergone shifts in geographical range and seasonal activities in response to ocean warming, sea ice change and biogeochemical changes, such as oxygen loss, to their habitats (high confidence). This has resulted in shifts in species composition, abundance and biomass production of ecosystems, from the equator to the poles. Altered interactions between species have caused cascading impacts on ecosystem structure and functioning (medium confidence). In some marine ecosystems species are impacted by both the effects of fishing and climate changes (medium confidence).

Coastal ecosystems are affected by ocean warming, including intensified marine heatwaves, acidification, loss of oxygen, salinity intrusion and sea level rise, in combination with adverse effects from human activities on ocean and land (high confidence). Impacts are already observed on habitat area and biodiversity, as well as ecosystem functioning and services (high confidence).

Since the mid-20th century, the shrinking cryosphere in the Arctic and high mountain areas has led to predominantly negative impacts on food security, water resources, water quality, livelihoods, health and well-being, infrastructure, transportation, tourism and recreation, as well as culture of human societies, particularly for Indigenous peoples (high confidence). Costs and benefits have been unequally distributed across populations and regions. Adaptation efforts have benefited from the inclusion of Indigenous knowledge and local knowledge (high confidence)

Coastal communities are exposed to multiple climate-related hazards, including tropical cyclones, extreme sea levels and flooding, marine heatwaves, sea ice loss, and permafrost thaw (high confidence). A diversity of responses has been implemented worldwide, mostly after extreme events, but also some in anticipation of future sea level rise, e.g., in the case of large infrastructure.

Future land cryosphere changes will continue to alter terrestrial and freshwater ecosystems in high mountain and polar regions with major shifts in species distributions resulting in changes in ecosystem structure and functioning, and eventual loss of globally unique biodiversity (medium confidence). Wildfire is projected to increase significantly for the rest of this century across most tundra and boreal regions, and also in some mountain regions (medium confidence).

Risks of severe impacts on biodiversity, structure and function of coastal ecosystems are projected to be higher for elevated temperatures under high compared to low emissions scenarios in the 21st century and beyond. Projected ecosystem responses include losses of species habitat and diversity, and degradation of ecosystem functions. The capacity of organisms and ecosystems to adjust and adapt is higher at lower emissions scenarios (high confidence). For sensitive ecosystems such as seagrass meadows and kelp forests, high risks are projected if global warming exceeds 2ºC above pre-industrial temperature, combined with other climate-related hazards (high confidence). Warm-water corals are at high risk already and are projected to transition to very high risk even if global warming is limited to 1.5ºC (very high confidence)

In light of observed and projected changes in the ocean and cryosphere, many nations will face challenges to adapt, even with ambitious mitigation (very high confidence). In a high emissions scenario, many ocean- and cryosphere-dependent communities are projected to face adaptation limits (e.g. biophysical, geographical, financial, technical, social, political and institutional) during the second half of the 21st century. Low emission pathways, for comparison, limit the risks from ocean and cryosphere changes in this century and beyond and enable more effective responses (high confidence), whilst also creating co-benefits. Profound economic and institutional transformative change will enable Climate Resilient Development Pathways in the ocean and cryosphere context (high confidence).

The Special Report on the Ocean and Cryosphere1 in a Changing Climate (SROCC) was prepared following an IPCC Panel decision in 2016 to prepare three Special Reports during the Sixth Assessment Cycle2 . By assessing new scientific literature3 , the SROCC4 responds to government and observer organization proposals. The SROCC follows the other two Special Reports on Global Warming of 1.5ºC (SR1.5) and on Climate Change and Land (SRCCL)5 and the Intergovernmental Science Policy Platform on Biodiversity and Ecosystem Services (IPBES) Global Assessment Report on Biodiversity and Ecosystem Services.