Bernd Riebe Posted on April 3, 2021 Veröffentlicht in Umwelt No Comments

UK scientists have confirmed for the first time that Pine Island Glacier in West Antarctica could cross tipping points, leading to a rapid and irreversible retreat which would have significant consequences for global sea level. 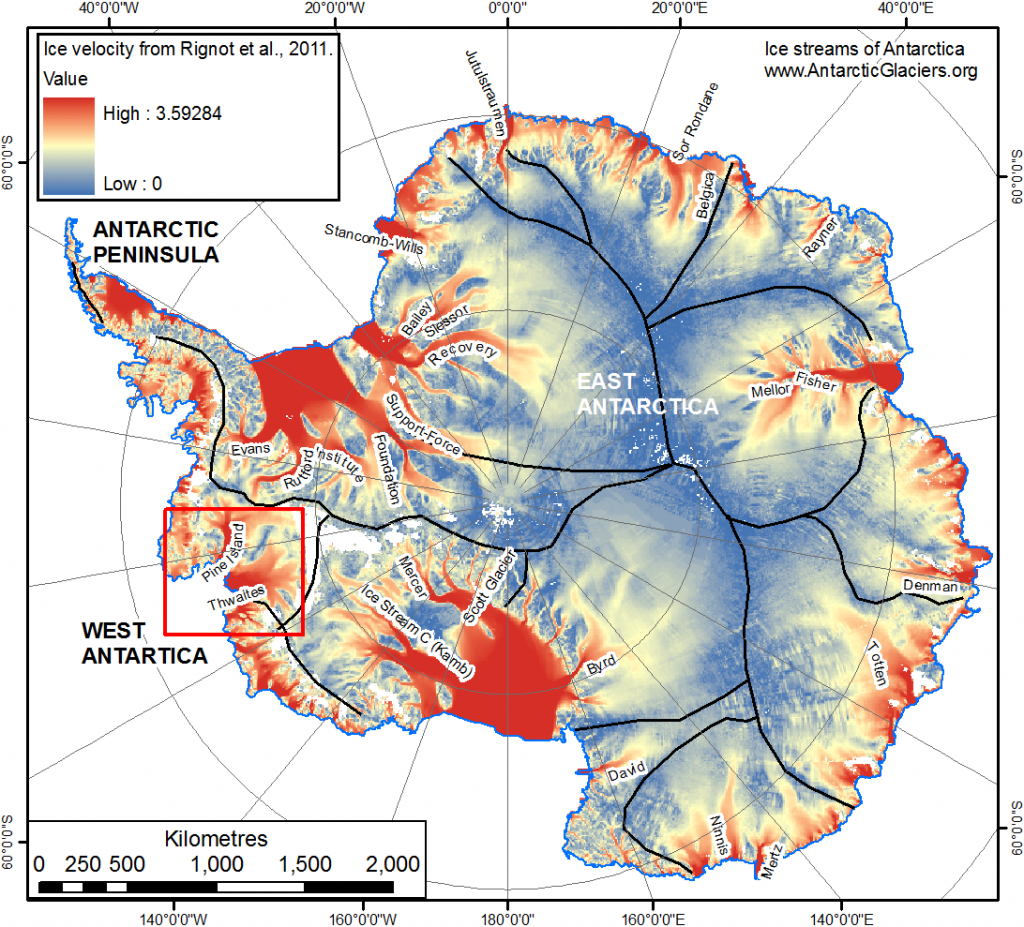 Scientists have argued for some time that this region of Antarctica could reach a tipping point and undergo an irreversible retreat from which it could not recover. Such a retreat, once started, could lead to the collapse of the entire West Antarctic Ice Sheet, which contains enough ice to raise global sea level by over three metres.

While the general possibility of such a tipping point within ice sheets has been raised before, showing that Pine Island Glacier has the potential to enter unstable retreat is a very different question. Now, researchers from Northumbria University have shown, for the first time, that this is indeed the case. Their findings are published in The Cryosphere, a peer-reviewed scientific journal.

Abstract
Mass loss from the Antarctic Ice Sheet is the main source of uncertainty in projections of future sea-level rise, with important implications for coastal regions worldwide. Central to this is the marine ice sheet instability: once a critical threshold, or tipping point, is crossed, ice-internal dynamics can drive a self-amplifying retreat committing a glacier to irreversible, rapid and substantial ice loss. This process might have already been triggered in the Amundsen Sea region, where Pine Island and 15 Thwaites glaciers dominate the current mass loss from Antarctica, but modelling and observational techniques have not been able to establish this rigorously, leading to divergent views on the future mass loss of the WAIS. Here, we aim at closing this knowledge gap by conducting a systematic investigation of the stability regime of Pine Island Glacier. To this end we show that early warning indicators robustly detect critical slowing for the marine ice sheet instability. We are thereby able to identify three distinct tipping points in response to increases in ocean-induced melt. The third and final event, triggered by an ocean 20 warming of approximately 1.2 °C from the steady state model configuration, leads to a retreat of the entire glacier that could initiate a collapse of the West Antarctic Ice Sheet.

Conclusions. Conducting quasi-steady numerical experiments, whereby the underside of the PIG ice shelf is forced with a slowly increasing ocean-induced melt, we have established the existence of three distinct tipping points. Crossing each tipping point initiates 225 periods of irreversible and self-sustained retreat of the grounding line (MISI) with significant contributions to global sea level rise. The tipping points are identified through critical slowing, a general behavioural characteristic of non-linear systems as they approach a tipping point. Early warning indicators have been successfully applied to detect critical slowing in other complex systems. We here show that they robustly detect the onset of the marine ice sheet instability in the simulations of the realistic PIG configuration which is promising for application of early warning to further cryospheric systems and beyond. 230 While the possibility of PIG undergoing unstable retreat has been raised and discussed previously, this is to our knowledge the first time the stability regime of PIG has been mapped out in this fashion. The first and second tipping events are relatively small and could be missed without careful analysis of model results but nevertheless are important in that they lead to considerable sea level rise and would require a large reversal in ocean conditions to recover from. The third and final tipping point is crossed with an increase in sub-shelf melt rates equivalent to a +1.2°C change in ocean temperatures and leads to a 235 complete collapse of PIG. Long-term warming and shoaling trends in Circumpolar Deep Water (Holland et al., 2019), in combination with changing wind patterns in the Amundsen Sea (Turner et al., 2017), can expose the PIG Ice Shelf to warmer waters for longer periods of time, and make temperature changes of this magnitude increasingly likely.
More information: Sebastian H. R. Rosier et al, The tipping points and early warning indicators for Pine Island Glacier, West Antarctica, The Cryosphere (2021). DOI: 10.5194/tc-15-1501-2021

This would be the first direct evidence of a climate-induced tipping point. The progressive warming of the Earth’s atmosphere leads us to expect further tipping points.

In the cryosphere, these include the melting of the West Antarctic Ice Sheet, which could lead to a sea-level rise of about 3 m over a period of 200 to 900 years.
Melting of the Greenland Ice Sheet
Global warming as low as 1.5 to 2 °C could reach the tipping point for complete melting of the Greenland Ice Sheet. This would lead to a sea level rise of 7 to 15m.
Melting of the Arctic sea ice
Here it is the increasing influence of the ice-albedo feedback that triggers a self-reinforcing process that is irreversible. For example, summer ice cover has already declined by 40% in recent decades. According to current data, the tipping point for the melting of Arctic sea ice has probably already been reached.