Giant iceberg A68 after three years drifting in the South Atlantic.

Bernd Riebe Posted on Juli 12, 2020 Veröffentlicht in Umwelt No Comments

The huge iceberg that split from Antarctica’s Larsen C ice shelf on 12 July 2017 is now in the open waters of the South Atlantic near the South Orkney Islands, about 1050 km from its birthplace. Having lost two chunks of ice, this record berg is a little less huge than it once was – and now that it is in rougher waters, it may break up further.

When it calved, A-68 was about twice the size of Luxemburg and one of the largest icebergs on record, changing the outline of the Antarctic Peninsula forever. Despite its size, however, it is remarkably thin, just a couple of hundred metres thick.

Satellites carrying radar continue to deliver images regardless of the dark and bad weather, which is indispensable when monitoring the remote polar regions which are shrouded in darkness during the winter months.
Antarctic icebergs are named from the Antarctic quadrant in which they were originally sighted, then a sequential number, then, if the iceberg breaks, a sequential letter.
Although A-68A is a relatively thin iceberg, it has held together reasonably well, but satellites will be key to monitoring how it changes in open waters.
Over the last three years, satellite missions such as Copernicus Sentinel-1 have been used to track the berg as it drifted in the Southern Ocean. For the first two years, it remained close to its parent ice sheet, impeded by sea ice.
However, it lost a chunk of ice almost immediately after being calved, resulting in it being renamed A-68A, and its offspring became A-68B. More recently, in April 2020, A-68A lost another chunk: A-68C. 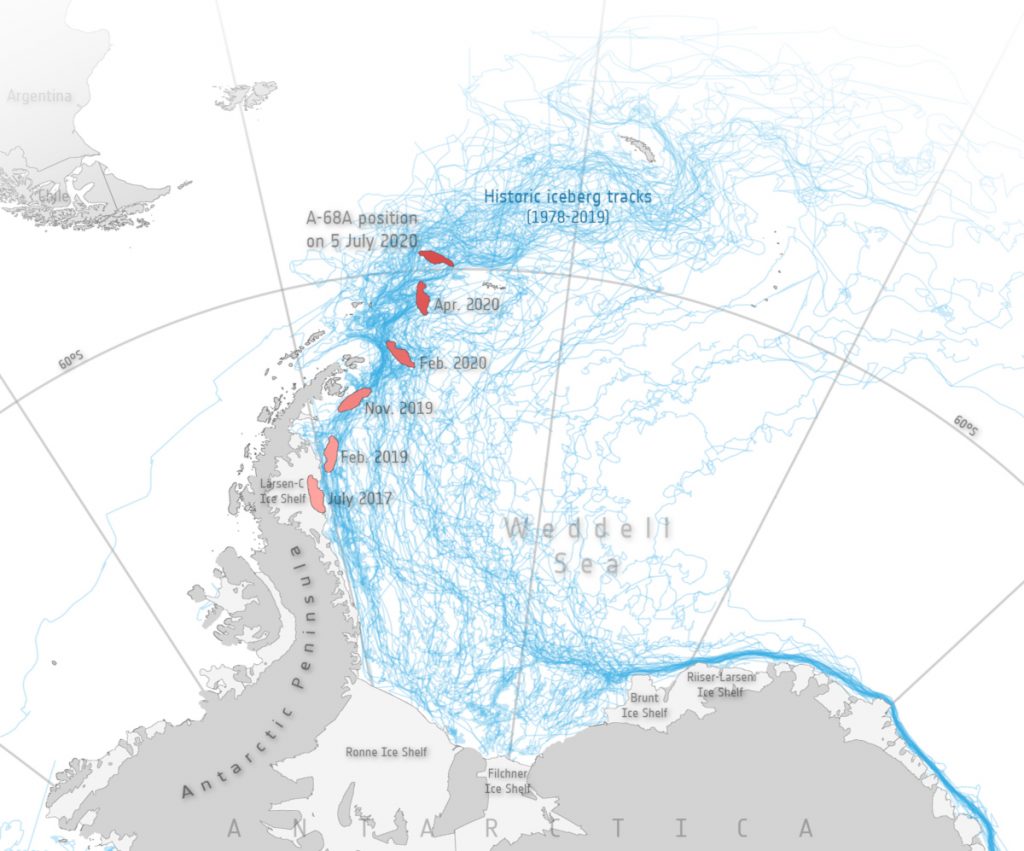 The map shows the different positions of A-68A during its three-year journey. The map not only  highlights how long it remained close to the Larsen C ice sheet, but how, over the last year or so, its pace of drift has increased considerably. The map also includes historic iceberg tracks, based on data from a number of satellites including ESA’s ERS-1 and ERS-2, and shows that A-68A is following this well-trodden path. 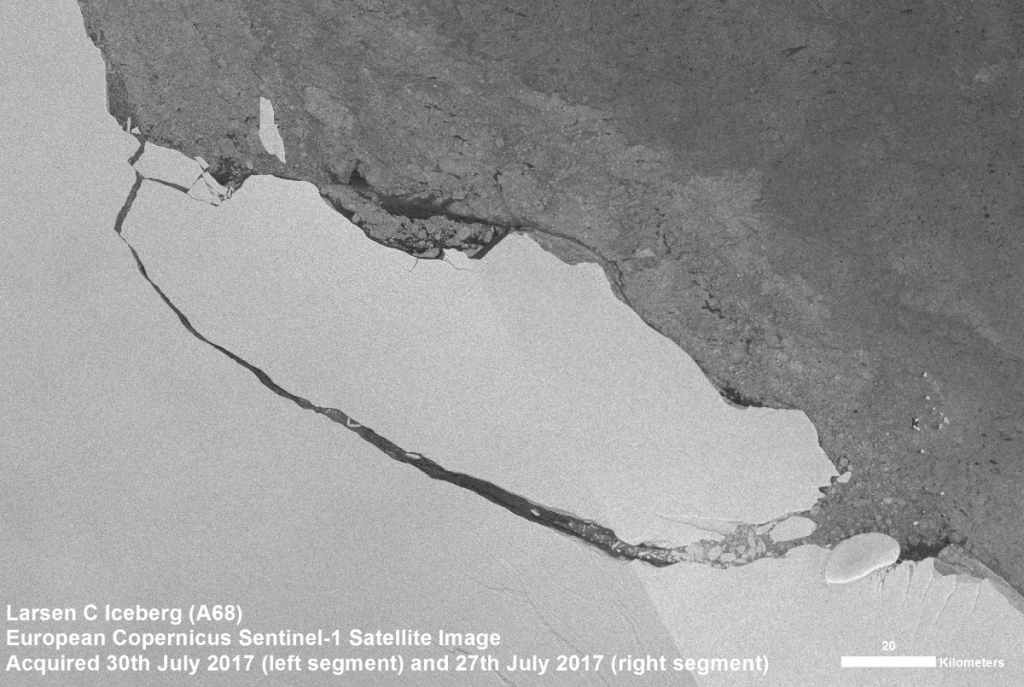 On 12 July 2017, Europe’s Copernicus Sentinel-1 mission returned radar images showing that a lump of ice more than twice the size of Luxembourg had broken off the Antarctic Peninsula.
Two weeks later the berg (A68) has drifted about 5 km from the ice shelf. Images from Sentinel-1 also show that a cluster of more than 11 smaller icebergs has now also formed, the largest of which is over 13 km long.

Animated image above – Progress of Iceberg A68 over a 12-month period captured by the European Space Agency Sentinel-1 satellites. The darkening of the images towards the end of the sequence shows how surface melt in the height of the Antarctic summer causes the ice surface to be much less reflective of microwave energy from the satellite. Stationary white features in the ocean are small (one one or two km across!) icebergs grounded on shallower parts of the sea bed and unable to move with the sea ice which can be seen drifting northward (bottom right to top left) with the Weddell Gyre. Notice how iceberg A68 swept some of these away in January 2019.

Dr Hilmar Gudmundsson from the British Antarctic Survey and Dr Hogg examine the lead up to the calving and discuss these events affect the stability of Antarctic ice shelves.
“The satellite images reveal a lot of continuing action on Larsen C ice shelf.  We can see that the remaining cracks continue to grow towards a feature called Bawden Ice Rise, which provides important structural support for the remaining ice shelf,” continued Dr Hogg.
“If an ice shelf loses contact with the ice rise, either through sustained thinning or a large iceberg calving event, it can prompt a significant acceleration in ice speed, and possibly further destabilisation. It looks like the Larsen C story might not be over yet.”
Dr Gudmundsson explained, “Although floating ice shelves have only a modest impact on of sea-level rise, ice from Antarctica’s interior can discharge into the ocean when they collapse.
Consequently, we will see increase in the ice-sheet contribution to global sea-level rise.
“With this large calving event, and the availability of satellite technology, we have a fantastic opportunity to watch this natural experiment unfold before our eyes.