The world’s largest vertical wind turbine in the megawatt class is currently located on the world’s largest wind test field at Neurather Höhe near Grevenbroich, Germany. The turbine has been completed and the test run could begin in October. The Swiss company Agile Wind Power has developed the system.
The machine, called „Vertical Sky A32“, has a diameter of 32m, is 105m high and is expected to produce 750kW.

„Vertical axis wind turbines actually only cause problems“, is what experts say. At least one rotor blade always runs against the wind. The rapid change in the angle of attack causes the blades to stall, resulting in a loss of performance.
Compared to the horizontal-axis wind turbines commonly used today, the verticals deliver about 30% less power. Agile Wind Power has allegedly solved this problem by means of a „real-time rotor blade pitch control“. The active and continuous blade adjustment enables high efficiency at low rotor speeds. The angle of attack to the wind direction is therefore always optimal
This would have successfully met the biggest challenge, namely the dynamic stall of the blades, as the angle of attack changes rapidly.

The significantly lower noise level and the simple logistics for transport, installation, operation and maintenance ensure a high level of environmental compatibility. This makes it possible to move Vertical Sky® closer to populated areas. Difficult-to-access locations that cannot be served with existing technologies can thus be developed with little effort. This makes Vertical Sky® attractive for decentralised power supply.

The test operation now starting at the Grevenbroich wind test field will show how this new development proves itself in practice. We will report here as soon as the blades rotate in the wind at the beginning of October.

On the evening of Sunday 15 November 2020 – while the commissioning phase was still underway – a rotor arm with the rotor blade attached to it broke off at the plant. Nobody was injured. Apart from damage to the land and the damage to the affected rotor arm and rotor blade, no other third-party damage was recorded.
After the incident became known, the securing of the accident site was ordered. Investigations to determine the cause of the damage were initiated. 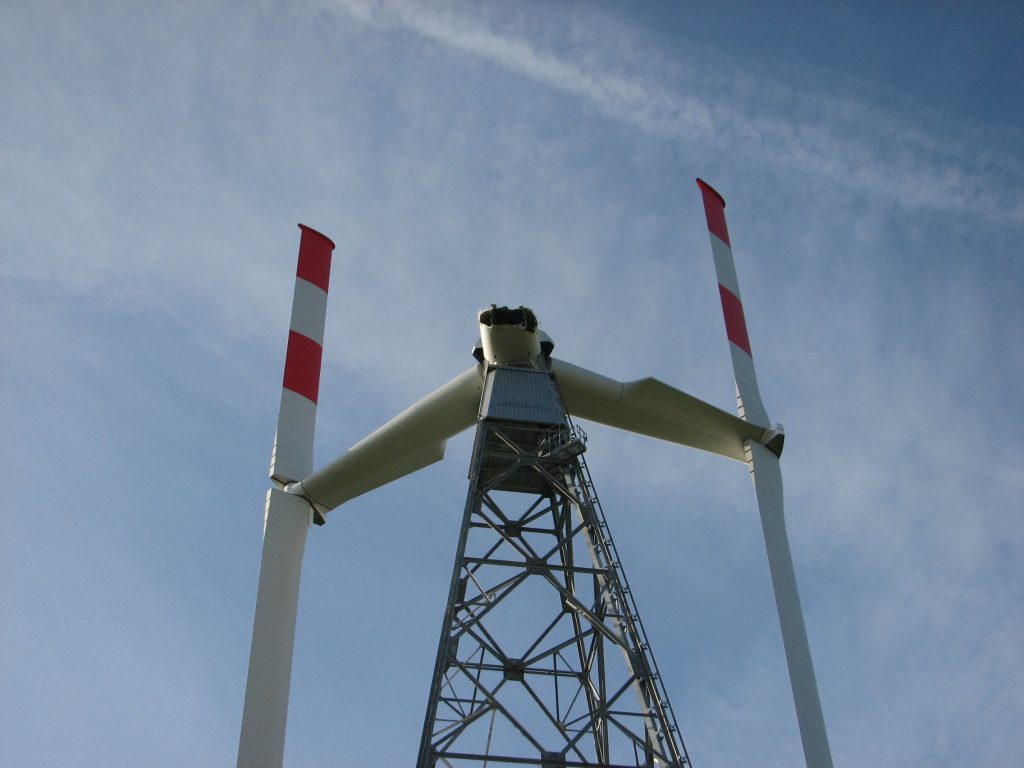 At the time of the accident, a cold front was moving through, with gusts of 20m/s (Bft 8) measured at nearby weather stations. The broken off rotor arm with wing is about 50m away from the tower. 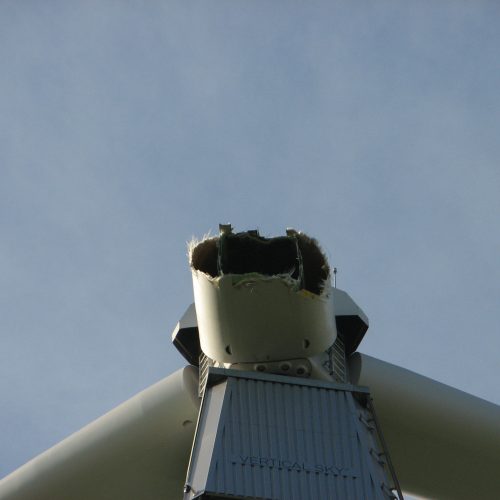 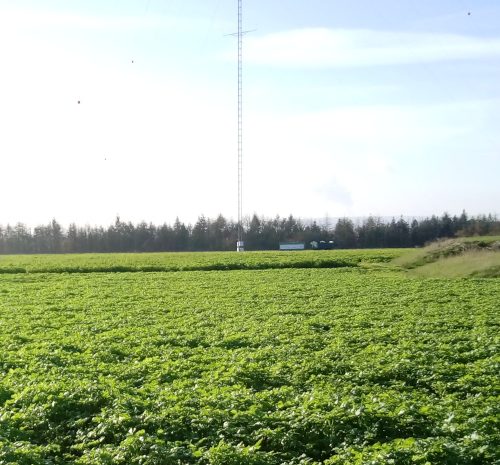 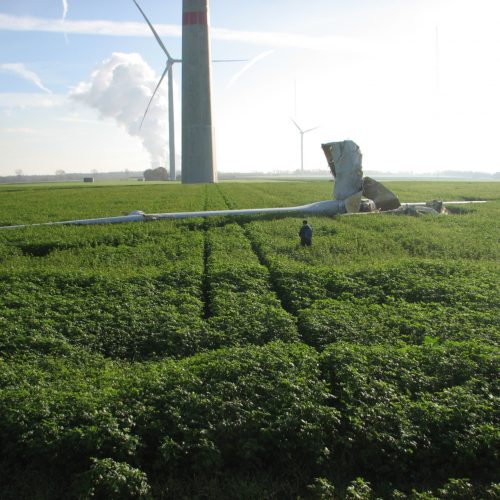 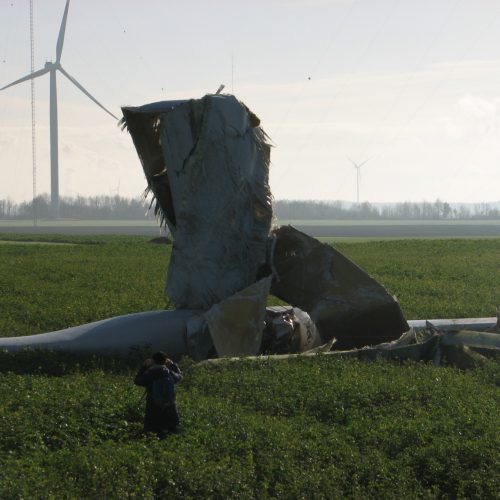 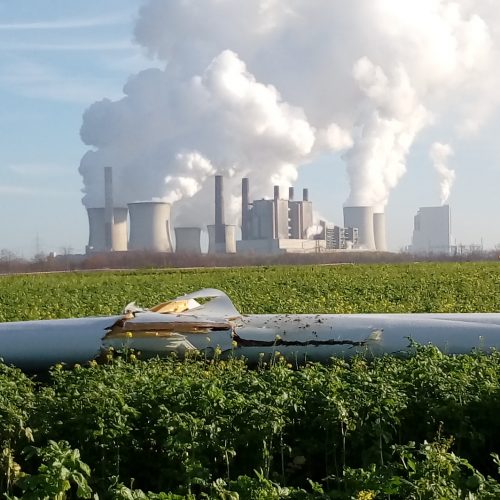 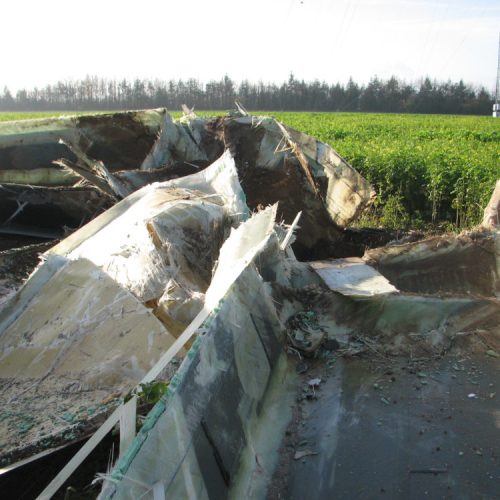 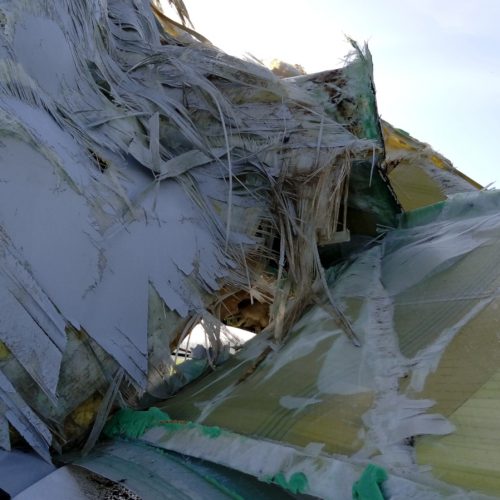 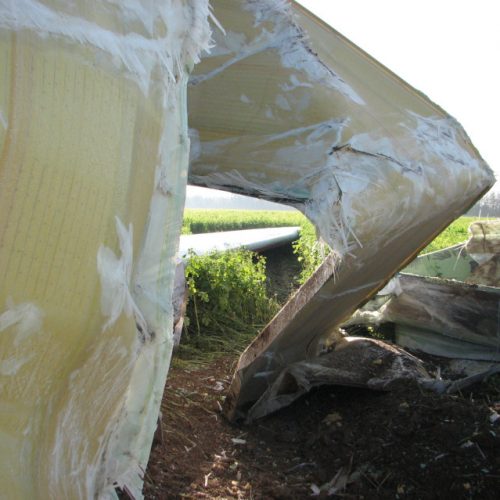 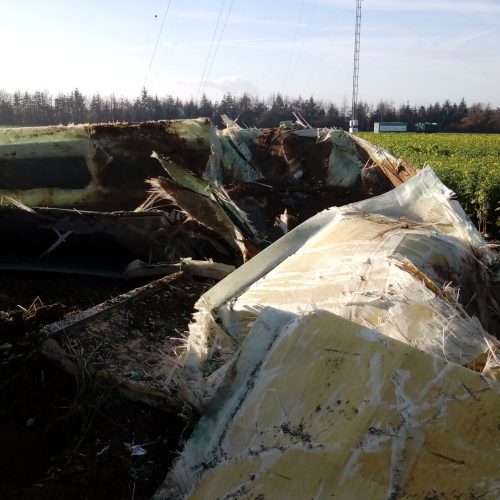 As there have been many interesting comments on the subject on YouTube I think it might be a good idea to give a summary here:

The comments are interesting, but some users jump to conclusions. The system has its decisive advantages. Especially with regard to the low speed and the associated noise reduction and the better visual compatibility for the fauna. Then the principle applies that it is better to install a system with poorer efficiency than none at all at the location.
The efficiency of vertical-axis turbines is poorer anyway, which is also one of the main reasons why this type of turbine has not become established. The (unpitched) blades never run in a constantly good flow and on one side the blades have to run upwind, which also eats up power.
However, while the horizontal axis only extracts power from the wind in ONE plane, the vertical axis has two extraction planes. Of course, you cannot extract more power from the wind than is in it (Betz rule), but after braking in the first plane and the associated pressure gradient, the expired flow tube mixes with the unbraked ambient air. The flow tube therefore constricts again somewhat, so that it can be widened again somewhat in the 2nd extraction plane. If you balance the aerodynamics in such a way that the first level is not completely braked, you can use this to your advantage.Of course, an accurate calculation of a vertical axis is difficult and in fact impossible. This is much easier with the HAWT. If you now use a cyclic pitch, you can significantly reduce the disadvantages of the VAWT.
One user says that the pyhsics are apparently being tricked. This is not the case here. The concept is advantageous in many respects, e.g. from a cost perspective. One must therefore look at the entire system from an economic point of view and not just focus on the physical effectiveness.
In fact, the VAWT has a more unusual load dynamic because more dynamic effects occur. The blades are subjected to alternating suction and pressure and the rear blade passage is behind the turbulence-generating tower or in the wake of the front extraction plane. But these alternating loads can nowadays be calculated very well with aero-elastic tools.
In terms of materials, too, we know a lot more today than we used to and can dimension the fibre composite components according to the loads. The simplicity of the wings (flat profile) is a huge advantage in construction and much easier to automate than the twisted blades of the HAWT. But one user is right, centrifugal forces generate outward bending moments that have to be countered with a stiffer structure, which in turn brings mass, which leads to higher centrifugal forces. Fortunately, nowadays there are materials with a corresponding tear length (e.g. CFRP).
Blade damage can occur for many reasons. Construction errors, assembly errors, material errors, control errors, errors in the load assumption, deviation of the wind conditions from the simulations, calculation errors of the structure. This installation is breaking new ground in many areas, so the learning curve is always very steep. Just think of the (horizontal-axis!) GROWIAN.
Lengthening the arms and shortening the blades is, in my opinion, not effective because it does not change the centrifugal force.
Wind turbines are highly dynamic systems that people from outside the field all too often underestimate. HAWTs are also subject to unbelievable alternating loads and rotor blades break off „all the time“ here too, the press is full of them.
We are just as excited to see how the project progresses and are keeping our fingers crossed for this type of turbine and the Swiss company.

Here are some interesting comments on the subject:

It’s difficult to tell from the photos of the accident, of course and it might just be the angle, but it looks to me like a torque issue. The blades are quite long and only supported at one point. That is an awful lot of leverage on the arm that the blade can exert as it is buffeted unevenly by winds. Particularly if they are using materials like carbon fiber, which have natural flex to them, it’s pretty easy to see what might have happened. All it would take would be for a harmonic resonance to cause an oscillation in the blade, because wind pressure at the top differs from that at the bottom or vice versa. Because centripetal forces were also at play and the extreme ends of the arms have no other structural elements to prevent resonance, it would have also likely become a circular oscillation, which would ad a tremendous, repeated, increasing twisting force on the arm. If you look at the closer photo of the hub where the arm broke off, the fibers from the sheared material appear to have a directional aspect which seems to denote that the blade twisted off in a clockwise direction, leaving the torn fibers pointing in the direction of pull.

For a long time, as a freelance development engineer, I have been dealing with the special features of VAWT. Like AGILE WIND POWER AG, I am convinced that VAWTs have huge potential. The advantages over HAWT are too great.
The main obstacle to a breakthrough is the complex vibration problems inherent in the VAWT system.

After the crash in November 2020, something is happening again at the wind test field near Grevenbroich. The company Agile Wind Power has analysed the cause of the damage and started work on a new modified rotor. the new construction should be completed in October.(more info in  the Medienmitteilung from Feb 2021) 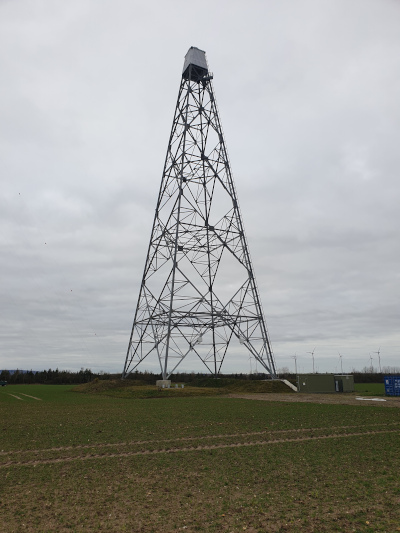 The components of the second prototype are fully assembled and ready for the first test run.

According to Agile Wind Power, the new turbine will be allowed to rotate for testing purposes once it has been approved by the authorities. There was a requirement to measure the natural frequencies of the turbine and compare them with the calculations, which was done with positive results. In the next period until commissioning, various measurements and work will be carried out. We will report further at this point.