Bernd Riebe Posted on Juni 19, 2019 Veröffentlicht in Umwelt No Comments

Here I would like to draw your attention to current information on the subject of climate change. This is primarily about climate-relevant data such as temperature anomalies, greenhouse gas emissions, sea ice expansion, glacier melting, sea level rise, reports on special weather extremes and phenomena such as El Nino should be mentioned.

Massive impacts on the cryosphere
The cryosphere is all of the Earth’s frozen water: ice caps, glaciers, permafrost, shelf ice, and snow found on every continent, but especially at the poles.
As massive, frozen white regions, the Arctic and Antarctica, serve an important role in regulating the planet’s temperature by reflecting sunlight back into space. Consequently, melting in these frozen regions accelerates warming further, causing even more ice melt — and that’s exactly what we’re seeing.
Glaciers and ice sheets in both polar regions are losing ice at an increasing rate. In fact, temperature rise in the Arctic has been more than double the global average over the last two decades. These changes impact people and ecosystems in these regions and far beyond. The Arctic, for example, is home to over 4 million people and many delicate ecosystems that rely on ice, all of which are at risk from warming temperatures. And beyond that, melting ice has grave implications for sea level rise:
A collapse of the west Antarctic ice sheet could dramatically increase the amount and speed of sea level rise across the globe.
Another alarming feedback is happening with permafrost, soil or rock that has been frozen for many years and stores large amounts of heat-trapping gases like methane and carbon dioxide. As warming reaches unprecedented levels, permafrost is starting to thaw and release those previously trapped gases, accelerating climate change. It is estimated that the Arctic and Boreal regions contain almost twice as much carbon stored than the entire atmosphere.
The ocean is taking the heat
Although the ocean has often been excluded from key conversations on the climate crisis, the special report spotlights how it’s been “taking the heat” all along. The ocean has been absorbing 90% of the heat over the last 50 years and 20-30% of human-caused greenhouse gas emissions since the 1980s, helping to buffer the amount of warming experienced on land — but not without consequence.
As a result, the ocean is becoming warmer and more acidic, and it’s losing oxygen, making it less habitable for marine life — from the coasts to the bottom of the sea floor.
Major impacts include:
Coral Reef Loss:

Harmful episodes of abnormally warm ocean temperatures, which can stretch thousands of kilometers and into the deep ocean, have become twice as frequent since the 1980s. For example, heat waves in the Tasman Sea in 2015 and 2016 caused disease outbreaks and shellfish deaths, impacting food supplies.
Degraded coastal ecosystems:

The degradation and loss of salt marshes and mangroves will lead to the release of huge stocks of ‘blue carbon,’ carbon dioxide that is currently stored in these ecosystems, into the atmosphere.
These are just a few major impacts, but it’s clear that many marine species face an uncertain future.

The report warns that impacts to ocean and ice are not limited to ecosystems; they are threatening people’s lives and their ways of life:
For people living on the coast and low-lying islands, sea level rise and storm events will increase. Around 1.9 billion people and over half of the world’s megacities reside on the coast, meaning that more frequent extreme events like hurricanes will inflict more destruction. Some small islands may become uninhabitable.
For people living in or near high mountain regions, water security is a major concern. Mountains with glaciers or snow store massive amounts of freshwater for communities, and with warming from climate change, these places — like in the Western Himalaya and in the Cascades — are losing water for farming.
And for people reliant on the ocean for food, climate change adds more pressure. Climate change is expected to impact the revenues of 89% of the worlds fishing countries by 2050.
he consequences of climate change are most severe for the ocean and cryosphere — and ultimately ourselves —

if we do not rapidly reduce greenhouse gas emissions. The decisions we make now will have ripple effects for generations to come.
With rapid emissions reductions that limit warming to 1.5°C, the impacts on people and ecosystems will be less challenging to manage. We can preserve more of our glaciers and high mountain landscapes, stabilize water supplies in mountain regions and further downstream, save more ocean ecosystems, and more.
Unfortunately, some changes are already locked in. Both the ocean and cryosphere respond slowly, so some warming and melting is inevitable. But we can also blunt the effects of change by restoring and conserving critical ecosystems, as well as helping communities prepare and adapt to climate change.
Altogether, the special report contains a range of complex, far-reaching impacts across our ocean and our ice, but we can prevent the worst of them if we act now.

The Arctic ice surface has reached its annual minimum. One of the lowest expansions since records began has been recorded. Sea ice in the Arctic Ocean reached its annual minimum in September. Despite the warm summer in the Arctic it was not enough for a new record minimum. At the beginning of September, slightly less than 4 million square kilometres were covered with more than 15 percent sea ice. Nevertheless, this is one of the lowest values since the start of measurements. It was interesting this summer that the sea ice had large gaps even in the immediate vicinity of the poles. Since the air above the water could warm up a little more, even thunderstorms formed in August.

This is a roaring glacial melt, under the bridge to Kangerlussiauq, Greenland where it’s 22C today and Danish officials say 12 billions tons of ice melted in 24 hours, yesterday. pic.twitter.com/Rl2odG4xWj

A day which will make #weather history, says @dwd_presse. #Germany set a new national temperature record (provisional figure) of 42.6°C in Lingen, defeating the old record by 2.3 °C. There were 25 weather stations above 40 °C #heatwave pic.twitter.com/euV1KmEuc3

Summer has barely begun, but temperature records are already being broken. Data released today show that the European-average temperature for June 2019 was higher than for any other June on record. Average temperatures were more than 2°C above normal and it has become the hottest June ever recorded.
Although not as persistent as that of summer 2018, this short heat wave, caused by a mass of hot air coming from the Sahara Desert, was intense. The five days of unusually high temperatures followed days with record-breaking temperatures further east in Europe. This led to the month as a whole being around 1°C above the previous record for June, set in 1999, and about 1°C higher than expected from the trend in recent decades. 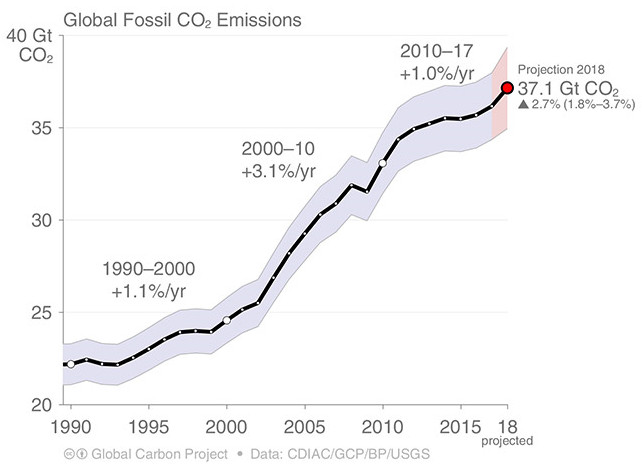 “The chance that there will be any ice left in the Arctic after 2022 is essentially zero,” Anderson said, with 80 percent of ice having melted in the last 35 years”

BTW this is Harvard chemistry professor who discovered CFCs were damaging the Ozone Layer https://t.co/DuI4iq20Lq

Global Temperatures – May 2019 was 4th warmest month on record

The last 5 years saw the 5 warmest Mays on record (May 2016 warmest and May 2019 4th warmest). Last month was also the 43rd consecutive May and 413th consecutive month with above average global temperatures, per @NOAANCEIclimate https://t.co/ojKzN0vRm6 #climatechange pic.twitter.com/8vbdgrMFFE

In the 1970s, #Vancouver Island was home to more than 170 glaciers. Rising global temperatures have reduced that number to five – with some scientists predicting they could all be gone within 25 years. via @SmithsonianMag https://t.co/G3lYntI2dF

Sea ice extent in the Arctic at a seasonally historic low

After the sea ice extent in the Arctic reached its largest winter extent on March 12, 2019, the melting season in the North Polar region began and reached a historic low for this time in the year (April 23, 2019). „Since the end of March there have been new negative records every day,“ says Dr. Lars Kaleschke, sea ice physicist at the Alfred Wegener Institute, assessing the current situation in the Arctic. He adds: „The further course of the sea ice recession and the ice conditions in the coming summer will also be very exciting for us in view of the start of the large MOSAiC expedition, which will take us to the central Arctic for a complete year with the research icebreaker FS Polarstern from mid-September this year“.

A gigantic cavity – two-thirds the area of Manhattan and almost 1,000 feet (300 meters) tall – growing at the bottom of Thwaites Glacier in West Antarctica is one of several disturbing discoveries reported in a new NASA-led study of the disintegrating glacier. The findings highlight the need for detailed observations of Antarctic glaciers‘ undersides in calculating how fast global sea levels will rise in response to climate change.(Global climate Change, NASA) – Read more

Thwaites Glacier Collaboration: The collapse of the Thwaites Glacier in West Antarctica could significantly affect global sea levels. It already drains an area roughly the size of Britain or the U.S. state of Florida, accounting for around four per cent of global sea-level rise —an amount that has doubled since the mid-1990s. A joint UK-US research programme launched today (Monday 30 April) is one of the most detailed and extensive examinations of a massive Antarctic glacier ever undertaken.